Description of the setup:
The sounds of a cassette recorder, a simple oscillator circuit and a wooden frog are recorded on an empty tape loop. The name Wilhelm‘s Punk refers to the piece Williams Mix by John Cage, in which pre-recorded and selected sounds are mounted on tape by a random system. For Wilhelm‘s Punk, sounds, which are produced during the performance are played on the tape loop and reproduced immediately. Each loop replay plays the already recorded fragments, takes up new ones and deletes older parts by accident. 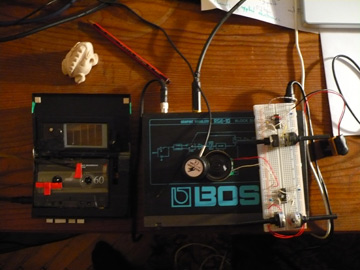 Composition for violin, grains on a metal surface and live-electronics ~8‘ , 2012
[violin is played by Barbara Lüneburg, recorded at Echoraum, Wien]

The piece consists of singular tones that fill the space horizontally and create a quiet ubiquitous drone. Filtered noise areas, quiet creak, some prominent sound particles, (no open strings), minimal timbre (out of a grayscale evolve „colours“), microtonality vs. widely spaced intervals, grains, ..
Notation:
The pitch of the violin results from the vertical position of the note within the score; i.e. high frequencies - low frequencies. The timeframe is also relative. The task of the electronics is to extract individual sections from the played parts of the violin and to filter them slightly by means of pitch shift or synthesis. Due to the division into 4 channels there are focal points, but they are selected loosely. The notation makes suggestions for this, but these are understood as indications.